Elodie Parkes is visiting us once again with her latest Hot Ink Press release, The Black Lion. Welcome back, Elodie! 🙂

Thank you for inviting me to the blog today to talk about my new release with Hot Ink Press, ‘The Black Lion’.

The idea for the story came to me on one of my work trips when I passed a spooky old hotel place with a sign hanging outside like one of those old Highwayman type inns. The words, ‘The Black Lion’ were written on the sign, but there was no picture, and the place itself could have been anything. Paint peeled off the big door and there were no lights on inside, even though it was twilight and quite dark because of the rainy weather.

In the story, I describe the doors, but the peeling paint becomes old posters for bands that have played in my version of a club, ‘The Black Lion.’

The title is also a pun on the nature of one of the characters. 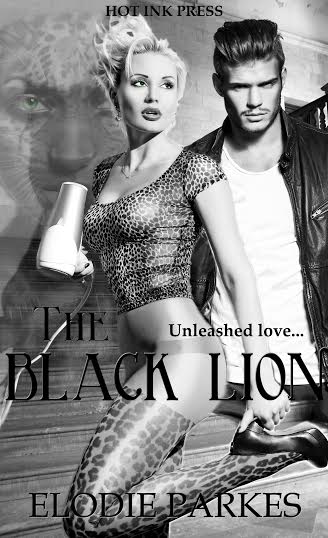 When Melissa fleetingly meets Sascha in a nightclub, she hopes he will approach her.

Sascha has secrets and it’s a long time since there was a woman in his life.

Unknown to both of them someone watches jealously.

Will this jealousy stop the budding romance between two people who both have something to hide?

Sascha gazed at the young woman, whose name, Melissa, he’d stored away like a precious jewel. He memorized the heart shaped face, the big green eyes, the dimple in her right cheek. He moistened his top lip with the tip of his tongue as he considered her mouth. That bottom lip needs sucking. I’d love to hold her close, just feel her warmth against me. I’d like more…I bet her hair feels like silk. He sighed as his gaze traced the length of her glossy chestnut hair. It fell around her shoulders and down her back. Sascha longed to grasp a handful, pull her close, and kiss her. He imagined it. His cock hardened as he recalled her scent when she stood in front of him. He thought about her look in the mirror. She was interested in him. It was obvious, and his own ineptitude was why he stood staring down at her, instead of grasping her to his naked form, fucking her hard. I could have compelled her. I could have tasted her cream, pushed my fingers into it, slid them over her clit. I could have licked her lips, her breasts. I could have her hands wrapped around my cock. I could have her writhing under me, coming, and driving me insane with her softness. I could give her so much love…

His thoughts were suddenly invaded by a low voice to his left.

“She’s not for you, brother. I see your scrutiny. I saw her first.”

Sascha prickled with anger at the voice and himself for not hearing the approach, nor scenting this man who leaned casually against the barrier. His fury burned in his chest and he whispered dangerously. “Who the hell are you?”

Find ‘The Black Lion’ retailing at .99 cents on all Amazons: