I feel extremely privileged to have our guest today. Cait Jarrod is not only a terrific author of romantic suspense novels, but she is also someone I call a friend. We met in person this last October at a writer’s conference after months of communicating online and we spent quite a bit of time getting to know one another. When we went our separate ways after the conference, I left feeling like I made a good friend. Cait has a new release from Evernight Publishing entitled Mystic Hearts, book 2 in her Band of Friends series and she’s here giving us some insight into what inspired her to write this series. Welcome, Cait!

Inspiration for the Band of Friends…

A note from Cait:

I’ve often been asked why I chose a circle of friends to write about for my first series.

Bringing a new story about the tight knit group of friends from Fredericksburg, Virginia, was like coming home, especially since I’ve lived in the area all my life. The friends I’ve made over the years, and have continued to keep in touch with, are much like the people in this book—minus the bombs and gunfights. Instead of a weekly cocktail hour, we get together at least once month at a winery, brewery or the lake. 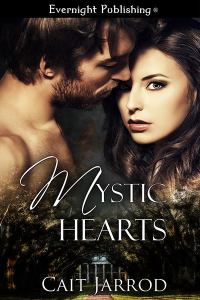 Nothing is as it seems….

Temptation landed at Special Agent Larry Newman’s feet—literally. Charlene Smith captured his heart after he rescued her from terrorists two months ago. A failed relationship and being an abused child have turned him into a loner and workaholic. The scars weigh heavy on him and keep him from pursuing her. So what’s a guy to do when the woman he pines for passes out in front of him while working a case?

Battling psychological wounds from abduction is easier than coming face to face with the sexy FBI agent she’s fantasized about for months. A single mother, avoiding the drama that dating would bring to her son’s life, she allows Larry close only in her dreams. Now, she’s second-guessing her decision. Should she have a relationship with this man who makes her feel alive just by being close?

As the couple forges into an abyss of emotions, they plow through secrets and criminals, and fight for the one thing that’s worth fighting for—each other.

Here’s an excerpt from a Cocktail hour, just before the guys arrive. The things good friends say to one another….

“I figured you’d be uptight and would need to blow off steam,” Celine said around a mouthful of margarita.

Celine choked. “You had sex!”

“Shush!” Pamela’s eyebrows slashed over her blue fierce eyes. “This is a PG establishment.”

Pamela gazed over her shoulder into the café.

No one watched them except for the bartender. He eyed Celine.

“No foul,” Pamela said then faced Charlene. “Fess up, you have.”

“How’d you two get the idea I had sex from me not wanting to talk about Andrew?”

Oh, boy. So, much for wondering if she should talk about Larry, they’d do it for her.

“Larry?” Pamela’s normally welcoming smile transformed into calm tone and she arched an eyebrow at Charlene.

If she hadn’t known Pamela, she’d actually have been nervous and answered immediately. As it was, Charlene would use this time to collect her thoughts and work out what to say. Hanging out on the pier, her and Larry chatting with one another in a way that was so comfortable she felt like she’d done it forever. Well, until her mouth ran away from her and confided her feelings. After that, things between them had become awkward.

Her mind jumped to the kiss next to her mom’s car…phew…she fanned herself and sipped more of her drink to camouflage the heat rising from her body to her face.

“That does it.” Celine gulped her drink. “I want some of what Charlene’s having.”

“Oh, no. You can’t. We’re exclusive.” Charlene looked at her half-empty drink. “This stuff is like truth serum.”

Catch up with Cait:

~Sign up for her quarterly newsletters or when a new release comes out at http://caitjarrod.com/contact-cait-andor-signup-for-news-from-cait-newsletter/. 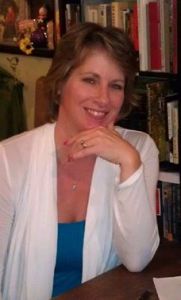 From writing ‘every girl’s dream heroes’ to ‘strong, down-to-earth heroines,’ Cait Jarrod twists ‘cliff hanging plots’ and ‘clever, unpredictable sub-plots’. She loves diving into a good book as much as she loves writing one.

Mother of three gorgeous daughters, she’s married to her best friend, hangs out with the WWC, a great group of women, and loves a good glass of wine.