It’s with great pleasure that I welcome Raven McAllan back to the Spicy Butterfly Garden. She’s here today offering up information on two Evernight Publishing releases she has back to back. First, she is part of the six EP authors that joined forces for the new Crimson Rope Anthology. From what I hear, it is hot, hot, hot! And how could it not be? The participating authors are pretty incredible. Second, Raven’s solo release of Livvy’s Devil Dom. Please join me in welcoming, Raven McAllan!

Well it’s not “what a night for m”e (although I did write 5k on the flight from Hong Kong to London on Monday night) it’s “what a week.”

I have two releases out.

Firstly on 5th I’ was honored to be included in The Crimson rope anthology with the fantastic authors London St James, Doris O’Connor, Elizabeth M. VaLey and Nikki Prince and R. Brennan. 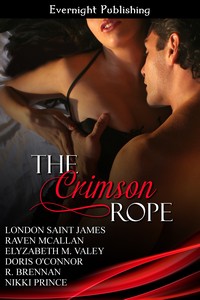 And of course it’s from http://www.evernightpublishing.com/the-crimson-rope/

And secondly, just the day after—today in fact if you’re reading this on 6th—Livvy’s Devil Dom is released.

Every time I have a book accepted, I do the chair swivel jiggle. Dance around the house and scare the cats. It doesn’t matter how good I, or my beta thinks it is, until I get the ‘we would be happy to’ email I wear refresh out on my computer. To say nothing of biting my nails.

And if it’s a no? Oh I swear, eat chocolate, leave it (and me) to sulk for a bit and then read it again. If I was told why it’s a no, I try to understand and take heed. If it’s a revise and resubmit, I look carefully at what the publisher says needs doing. Then I make a decision to see if I think I can do that. Sometimes, it’s a no it isn’t me. Then it’s a rethink to see if it will fit better elsewhere. Not all stories suit all publishers. When you find a publisher that likes your ‘voice’ it’s an amazing feeling.

Sadly sometimes you think you’ve clicked and oh my no you haven’t. It’s like a big black cloud over you, when a book both you and your editor thought works sinks without a trace due to the publisher’s reputation.

That was the case with Livvy’s Devil Dom. Oh I grant you it was only half the book it is now. And the changes that were made to it after myself and my editor sent it off to be formatted did it no favors. What made it worse was that until it was released I and the editor had no idea things had been changed, and readers pointed out the errors, and naturally blamed us.

Happily, that publishing house is now defunct, and I and all the other authors had our rights returned to us.

For a while I sat on my story and let it simmer, until Sael my lovely Devil Dom started to shout at me. When I re read the story, I cringed in places. I wrote it a while ago, but however under the errors was a hot story clamoring to be improved and given the opportunity to shine.

So Sael and Livvy shouted at ne, I I’m very character driven) told me what had been missed out, what I had to add and where, and eventually their story, their full story unfolded.

I then sent it to Evernight and held my breath. Bless them they were back to me overnight with a yes, and ohh my, did I dance around the house. Sael and Livvy were going to get their second chance.

When Livvy releases the devil within, he comes with sex that is out of this world—and the small matter of a life or death and decision. As for Sael, he has never met a more ornery or sexy as hell human than formerly-vanilla teacher, Livvy.

She belongs to him, for now, and this devil Dom will try everything in his power to ensure she stays his.

He needs her complete submission to survive, but even if she gives it, will it be a happy-ever-after or hell on earth?

And how about a wee tease?

Her touch brought his fangs out, and his tail swished in an arc. To her surprise, a neat but vicious set of horns appeared on either side of his head. Shiny and dark, they made her tremble. It wasn’t pure fear, Livvy noticed, but tempered with excitement.

“You bring out my Devil Within. In a good way. You complete me. And it saves me explaining that these”—he touched his horns—”will appear.”

Livvy stared. Then, as a credit to her own temerity, ran her fingers over them. Velvet, rock hard velvet.

“What do you do with them?” she asked.

He’d shown her—almost. His head dipped toward her pussy. Then he stopped and rubbed one velvet tip over her clit.

“Show me.” She stared up at him and hoped the trust and interest she had were obvious in her expression. “Show me what you use them for. I’m guessing it’s not for hoopla or quoits.”

Sael sniggered. “Not unless your kink goes that way. I er, well…” His voice trailed off. Livvy rolled her eyes.

“You reckon? Let me show you.” His voice was gravelly, with added heat. “Ah now, pet, feel the heat.” He got up onto his knees, lifted her legs to stretch out each side of him and bent his head. The fine, short, and curly hairs tickled her skin, and Livvy jumped. It didn’t tickle, exactly, but it did heighten her arousal. Then Sael stroked her clit with the tip and let it slide over her soft skin toward the entrance to her channel. Livvy wriggled and gasped as a wave of fire swept through her.

“It’s hot and heat, and it throbs.” She stopped moving as he edged the horn oh so gently inside her. Her muscles tensed, and he paled. Did he think she might say red, or even worse, crumble? There was no chance. She’d got this far, and Livvy didn’t intention to renege.

She began a tiny clench and release move, over and over again. “I want more.”

“Dammit, do you know how bloody difficult it is not to thrust, take, and force the pace?” He grunted the words. “You know the expression to the hilt?”

Why was he talking about stupid expressions and not filling her to the hilt? Ah…

He grinned. “Did you know the opposite end to the tip of a Devil’s horn is called the hilt?” Then he pushed.

Tiny stings slid over the inner walls of her pussy, as his horn slid “to the hilt” and back. Over and over those little stabs hit her and tingles spiraled from them. Wave after wave of fiery heat pulsed through her as he moved. Livvy opened her eyes a slit, and watched in awe as tiny shards of light pulsed around his head, dancing up and down in time to their sexual beat. The sensations were so different from when he fucked her with his cock or finger. Every so often a gush of her arousal slipped past his horn to coat her legs. Then he shuddered and groaned.

“Liv-love, I can’t help this. Take a deep breath, and hold me tight inside. Because if my horn makes me come, my cock will spill all over us, and you’ll have to lick it off me and me off you. We’ll defer on the sheets.”

What the hell is he rambling on about?  Being impaled on a hot throbbing horn didn’t add to the ability to think coherently. She didn’t bother to answer him or try to work out how his cock was so agile. She just clenched her inner muscles and refused to let him go.

Livvy floated, and saw bright colored lights. She was only dimly aware of Seal slumping next to her before he gathered her into his arms and let his other horn stroke over her neck.

She snuggled into him, and pressed her lips to his nipple. He wriggled, and she giggled. “That’s not an invitation for the next round. That’s a thank you.”

“Not for a few minutes anyway.”

She looked up at him, and he laughed. “Ah, pet, you are so easy to read at times. Now rest there until I run a bath. Um you’re not too sore, are you? I got a bit carried away and didn’t temper my pulsars.”

“Is that what it’s called?”

“Thingies? Thingies, sheesh, woman.” He laughed so hard he nearly fell off the bed. Livvy was oh so tempted to give him a helping hand.

Nosy links about Raven can be found at www.ravenmcallan.com

One thought on “Double the Pleasure With Raven McAllan”