I’m more than pleased to have Elyzabeth M. VaLey back on the Spicy Butterfly Garden promoting her story, Dance for me, Princess, from the Evernight Publishing Anthology, Alpha’s Claim. She was one of the very talented authors that I had the pleasure of joining in that anthology and I loved her story. Enjoy!

Many of my stories wouldn’t have been born without music. The beautiful, harmonious combination of notes, regardless of the musical genre, appeal to my muse and have sparked the beginning of more than one romance.

Sometimes, the music comes first, but other times it appears half way through the story. Dance for me, Princess was an example of the latter. I knew the characters and I was simply looking for some music for Sophia to dance to. I started out with some of the more upbeat themes of Diary of Dreams, but something was off. Youtube then suggested Blutengel. I’d never heard the German music group before, so I thought, why not? The first song that came up and called my attention was When I feel you.

I still remember hearing the lyrics and grinning like a fool. That was the song. It was exactly how Markus felt. Furthermore, it had a good beat to which Sophia could dance.

Sophia has her own song too. I had already baptized her as Frost Princess when I found that Blutengel had a song titled Ice Princess.  The lyrics have little to do with Sophia, except that indeed there is no coldness in her soul, but the song had an exceptional rhythm.

With the music set, some visual inspiration (check out the Pinterest board), and a whole lot of demanding whispers from the characters, the story of Markus and Sophia became Dance for me, Princess. I hope you enjoy it! 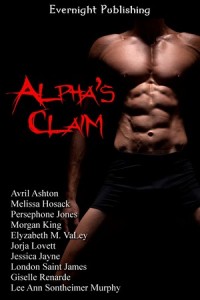 The shifters in our Alpha’s Claim anthology have one thing in common—they won’t take “no” for an answer. Whether they lead packs of their own, or whether they walk a solitary path, these alphas won’t let anyone stop them from claiming their women.

Lose yourself in these ten sinfully delicious love stories. After all, who could deny an Alpha’s Claim?

Dance for me, Princess by Elyzabeth M. VaLey blurb:

When ruthless businessman and shifter Markus Topponiem sets his eyes on something he likes, he pursues it until he gets it. No exceptions. That’s why when he catches a sniff of the delicious scent emanating from a girl with blue hair, he doesn’t think twice about following her and making her his.

Sophia, a.k.a. Frost Princess, dances to forget and keep her demons at bay. Then Markus comes into her life, and in the wake of his passion he revives the monsters of her past, causing her to flee.

Will Markus be able to persuade her to give herself to him or will her fear destroy their future?

Excerpt from Dance for me, Princess

Markus Topponiem tugged at the cuffs of his white shirt, adjusting it. He crossed his right leg over the left, resting the ankle on the knee. His hands on his lap, he waited. His gaze slid around the room, and his cock twitched in expectation of what he hoped was to come. His heart thundered in his chest, following the lead of his male organ and anticipating the thing that could change his life forever.

However, even though nerves danced across every pore in his flesh, he played the part of calm and relaxed. No one who saw him could have guessed that he was on the verge of breaking down. Naturally aloof, as was usual among his species, he had been taught from a young age that expressing emotions openly was risky. His mother’s early death had made him unnaturally cold, and his  ability to remain poised and under control in any situation had, not surprisingly, earned him nicknames such as “Ice King” or “Cold Hearted”. Animals didn’t hunt by being rash and irrational; they sat and waited. Everything in life, including the building of financial empires, did well to follow the same rule. Sit, wait, and strike when the prey was weakest. With that in mind, he conducted business in what some called a ruthless, heartless way. Perhaps that was why he was single. He hadn’t found the woman who stirred his predatory instincts. Until today.

Defined as weird since she was about eight, Elyzabeth honors the title by making up songs about her chores, doodling stars and flowers on any blank sheet of paper and talking to her dog whenever he feigns interest.

Losing the battle to the voices in her head is her favorite pastime after annoying her younger sister with her singing. Writing stories full of passion and emotion where love conquers all is her happy pill and she’ll forgo sleep to make her readers live the dream.