The hustle and bustle of Christmas is over and we can all sit back, relax and read! 🙂 For those that celebrate Christmas, I hope you had a joyous holiday. A few more days until we all get to welcome in the New Year! Hard to believe that 2013 is coming to a close and 2014 is just around the corner.

Today, I have Melissa Hosack back at the Spicy Butterfly Garden introducing us to her latest release, Supernatural Kid on the Block, book 2 of her Supernatural series. Welcome back, Melissa! 🙂

Characters have a way of surprising readers. There’s nothing more fun than a surprise development or personality reveal from a favorite…or even a not so favorite. This can happen for authors as well. Such a thing happened for me with Kristie Taylor in my Supernatural series. In the first book, Deadly Encounters of the Supernatural Kind, Kristie was no more than a silly, airheaded cheerleader who helped motivate another character into a necessary action. In my newest release, the second book in the series titled Supernatural Kid on the Block, she really opened up to me. In Supernatural Kid, Kristie showed herself to be more than the one dimensional character she’d started as. She revealed that she was caring and loyal…and shockingly intelligent. I had such a fun time watching her character unfold. The main character, Camden, was fun to begin with. The two of them together was simply an absolute blast for me. 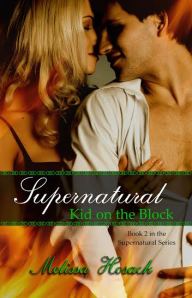 Check out an excerpt from this unlikely duo!

Kristie uncovered her eyes and stared up at him, fear in her expression. “Do you love me?”

“You know I do.” Camden’s words came out in a breathy, nervous whisper. He was worried as to where this was going.

“That’s what frightens me.” Taking a deep breath, she explained. “When your power rolled over me, I would have gladly died for you, no question about it. You have to fight that. These people could use it against you, use me against you. If they threaten me, you might do something stupid, like die for me…again. You can’t let that happen. Priya’s people depend on you. You’re a dragon. You’re immortal. I’m just a human, and I’m fragile. Don’t let yourself get hurt over something so irrational.”

“Promise me you won’t let that happen. I need you to promise your main target is Stefan, no matter what.”

“You are more important—”

“Promise,” she said firmly. “I won’t let innocent children suffer because your main concern is me. I won’t let you die.” She took a shaky breath and her eyes turned cold. “Promise me or I will leave you. It will be the hardest thing I ever have to do, but I will walk out of your life and never come back. If you love me, you’ll do this for me.”

“I do love you,” Camden said slowly, dread filling his stomach. He was trapped by her words. There wasn’t anything he wouldn’t do for her, but she was asking something nearly impossible.

“I know you do,” she said softly to his confession of love. “This new power can make that backfire on you. For just this week, I can’t be the top priority in your life.”

Camden sighed wearily and dropped his head into his hands. She was right, but he hated it. An insane idea popped into his head. Before he could curb it, he said, “I’ll do this for you if you do something for me.” On her puzzled nod, he dropped to a knee in front of where she sat. “Marry me.”

To find out Kristie’s answer, check out the full book here: